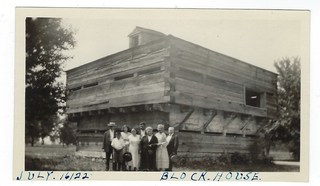 "What the heck is that? It looks like part of an abandoned fort!" Barry exclaimed as the old blockhouse came into sight.

"That's an extension of the Fort Malden defenses built in the late 1830s," she explained.

"Good god, Luci this thing is sturdy. It's all square-cut logs and looks like white oak."

Giving Barry a gentle shove, she teased him, "Remember, the British built it to fight off those annoying Americans."

Fort Malden, located on the banks of the Detroit River in Amherstburg, Ontario, Canada, and its extension on Bois Blanc (Boblo) Island, evolve as poignant places of remembrance and loss for protagonist Luci in my upcoming novel 181 Blackhorse Road.

Built by the British in 1795, the fort was a defensive fortification and was a British stronghold on the Detroit frontier during the War of 1812 and in the Rebellions of 1837-1838.  The dialog above appears in my novel when Barry and Luci are exploring Bois Blanc; a place that had transitioned from a military fortification to a favorite rendezvous for lovers.

Imagine the chill and goosebumps that floated across my body when I came face-to-face with this photo of the Bois Blanc blockhouse today!  The small photograph was tucked among a scattered grouping of old family pictures, and as my eyes took in the features of the old blockhouse, I couldn't believe how its description in my novel matched the photo completely:

"This is in remarkable shape," he commented as they circled the building. "Look at the line of gun slits on all four sides of the first and second floors," he pointed out to Luci. "I guess the British were pretty damn serious about holding on to this piece of real estate," he chuckled. Peeking through the first-floor gun slits into the darkened structure, Barry noticed there were narrow openings cut into the ceiling of the first floor. "That's curious. What the heck?" he remarked. "Hey, Luci, I've read about this before but have never seen it." Lifting Luci so her eyes could reach the narrow openings to see into the building, he instructed her, "Take a look at those long slots in the ceiling."

"I see them! What are they?" she questioned, looking at the unusual slim openings.

"Those are murder slits," he said.

What happens between the two lovers on Bois Blanc Island?  You will have to read the book, but meanwhile, it's okay to let your imagination run wild!

A heartfelt tale of emotional maturation, coming-of-age, romance, and womanhood that chronicles family conflict, a generational clash of beliefs, and the transforming power of choice, gratitude, and forgiveness.

Leadership Development for Healthcare, A Pathway, Process, and Workbook
A pathway and process for developing good leader behaviors and leadership practice
52-Week Game Changer: How She LEADS